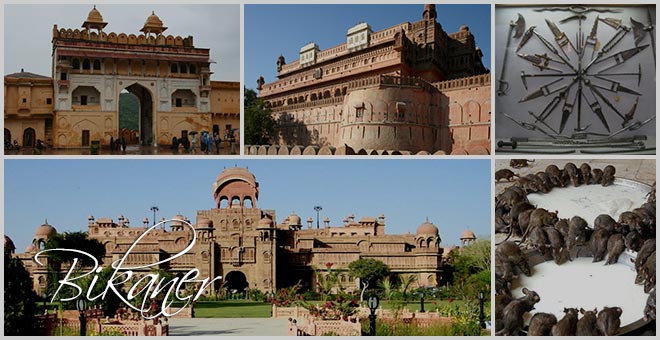 Bikaner was founded by Rao Bikaji in 1486 AD, from where it gets name. Modern Bikaner is the result of the foresight of its most eminent ruler, Maharaja Ganga Singh (1887-1943), whose reformative zeal set the pace for Bikaner’s transformation from a principality to a premier princely city .Bikaner City is around 330 kms far from capital city Jaipur. Bikaner is the fifth largest city in the state of Rajasthan.  It is also known as the Camel City. Bikaner is situated in the north-west of Rajasthan and it can legitimately boast of some unique architectural marvels of India. This desert city is carved out from red sandstone. Bikaner is hugely popular as one of the most exquisite destinations in India.

Bikaner city, the desert state of Rajasthan has a rich cultural heritage and a lot of attractions. Few of these spots that are a must-visit sights of Bikaner are listed below. –

The Junagarh Fort is one of the most looked after places to visit in Bikaner. The whole of Bikaner city is situated around this majestic fort that was built by a former ruler of Bikaner, Raja Rai Singh.The Bikaner fort resulted to be a marvelous example of architecture and great center of art. The main attractions inside this grand building are palaces( Dungar Mahal, Anup Mahal, Chandra Mahal and Mahan mahal).

This marvelous palace was built by Maharaja Ganga Singh in remembrance of his father Lall Singh. The three-storey complex is coated in red sandstone quarried from the Thar Desert. Now, this property has been converted into an awe-inspiring heritage hotel known as the Luxmi Niwas Palace.

Gajner Palace is a jewel in the Thar Desert, built by Maharaja Ganga Singh of Bikaner on the edge of a lake. It is constructed by using the red sandstone, which look stunning against the backdrop of a thick forest.The property was converted into a heritage hotel in 1976.

Karni Mata Temple houses more than 20000 rats (black). They are considered holy and are called Kabbas. This is the only temple in the world, where rats are considered pious and worshiped. It is said that if u are lucky and blessed you will see a white rat too. This is a magical temple where people come from all around the world.

Apart from palaces and temples this city is also famous for so many other things. Some are:-

The International Camel Festival of Bikaner is one of the most sought after and talked about events in Rajasthan. It is held every year in the month of January. It is a two day fair, which is organized against the enthralling backdrop of the Junagarh fort.

Bikaner is famous for its food. Out of the numerous ones, Bikaneri Bhujia, Raj Kachori and Kesar Kulfi are delicious. Bikaneri bhujia and rasgullas are two food items that exported .

Bikaner has a great deal of things to do. Put Bikaner Camel safari definitely on the top of your list.