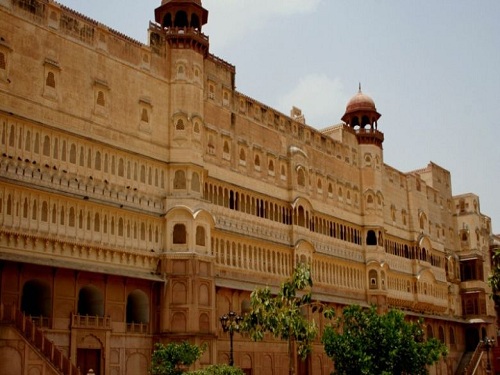 The erstwhile Princely state of Bikaner and its capital city Bikaner was founded by Rao Bika (1465-1504 AD.) by the blessings of Goddess Karni Mata in the year 1488 AD. In those days this vast tract of desert country was called “Jangaldesh”. Prince Bika of the Rathore clan of Rajputs was the valiant son of Rao Jodha- the founder of Jodhpur. Encouraged and provoked by his father, Prince Bika moved out of Marwar (Jodhpur) on an ambitious military adventure, with a small contingent of Rathore warriors (500 soldier and 100 cavalry men). He was supported by his brave uncle, Rawat Kandhal, who always stood by him as his guardian and politico-strategic advisor.

The Junagarh fort Bikaner Rajasthan consists of seven gates. The gates are referred to as ‘Pol’. Karan pol, Suraj pol, daulat pol and chand pol are some of the names. The suraj pol is east facing and hence has the name as per sun light’s availability. Palaces are named as karan mahal, phool mahal, anup mahal and badal mahal. Every palace inside the fort has its specific requirement. The Junagarh fort also has a museum. The museum consists of lots of antique and unique articles and paintings.

The first dig ceremony for construction of the fort was held on Thursday, Phagun Vadi 19, V.S. 1645 i.e. 30th January, 1589 AD. The foundation was laid on Monday, Phugan Sudi 12 V.S. 1645 i.e. 17th February, 1589 A.D. and it was completed on Thursday Magh Sudi 6 V.S. 1650 i.e. 17th January 1594 AD. Later on this fort became the most magnificent example of architecture and great centre of art. The present fort is a composite structure, the result of intense building activities of many rulers through four centuries and one of the precious gems of Indian architecture in the midst of Thar Desert.

The structures built within the Junagarh fort are the palaces and temples, which are made of red Stone and marble. The palaces are described as picturesque with their assortment of courtyards, balconies, kiosks and windows. The fort, the temples and the palaces are preserved as museums and provide insight into the grandiose living style of the past Maharanas of Rajasthan.The fort is called “a paradox between medieval military architecture and beautiful interior decoration”.