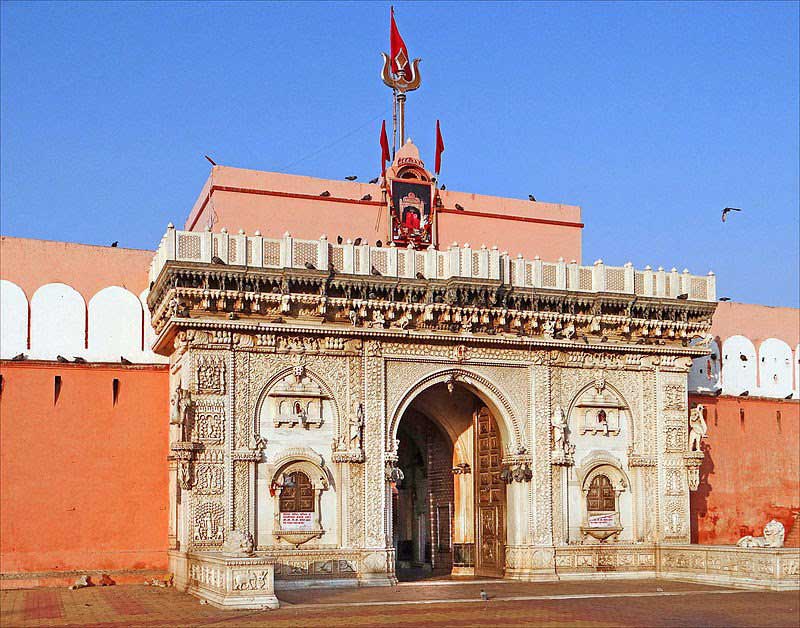 Bikaner may be known for its camel safaris and impressive fort in the state of Rajasthan, but it is its unique temple in the town of  Deshnok 30 km from Bikaner that attracted us to the area. The Karni Mata Temple just may be the most unique and freaky attraction we’ve ever been to.

The Karni Mata Temple just may be one of India’s strangest attractions.It houses thousands of rats,  yes rats and pilgrims make regular trips to Deshnok to worship these long tailed rodents. Karni Mata Mandir is easily accessible by regular buses from Bikaner and Jodhpur. To ensure a comfortable journey, one can also opt for taxis that can be availed from anywhere in Rajasthan. The temple is dedicated to Goddess Karni, who is regarded as the incarnation of Maa Durga.

In the main shrine, the image of the goddess is placed with holy things at her feet. Surrounded by rats, Karni Mata is holding a trishul (trident) in one of her hands. The image of Karni Mata is 75 cms tall, decked with a mukut (crown) and a garland of flowers. On her either side, images of her sisters are placed. Karni Mata Temple attracts numerous tourists and pilgrims throughout the year, due to its unique presiding beings.

The temple has around twenty thousand rats in residence, who are fed by members of the extended Depavats family – there are 513 Depavats families – and devotees to Karni Mata. Though most of the temple-devotees work at the temple in shifts based on the lunar cycle, some families live in the temple permanently, taking care of the rats and sweeping the floor of excrement and food crumbs.

Out of all of the thousands of rats in the temple, there are a few white rats, which are considered to be especially holy. They are believed to be the manifestations of Karni Mata herself and her four sons. Sighting them is a special blessing and visitors put in extensive efforts to bring them forth, offering prasad, a sweet holy food.It is regarded auspicious, if a rat (kaba) runs across one’s feet. Even, a glimpse of kaba (white rat) is considered promising and fruitful. Twice a year, a festival is celebrated in the honor of Karni Mata. A grand fair is organized during this time and people come here to seek the blessings of the Goddess.