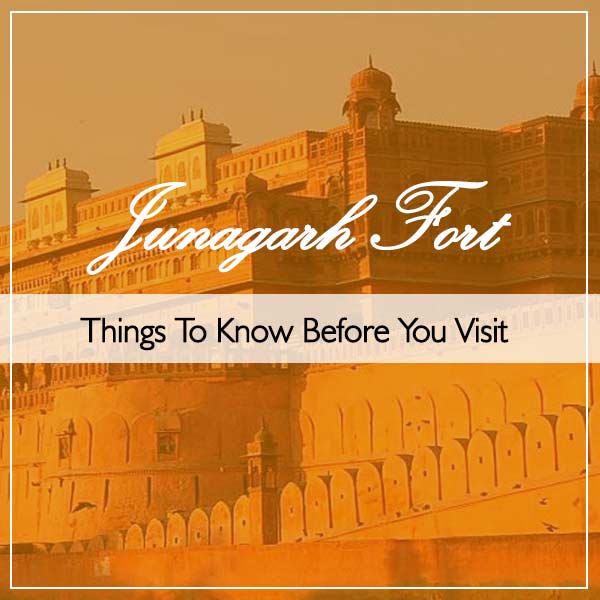 Junagarh Fort in bikaner is located amidst the Thar Desert and was built by Raja Rai Singh in 1594. Originally it was called Chintamani. Junagarh is itself a very beautiful fort and one of the few forts that are not built on a hilltop and mostly know for its beautiful architecture. But other than Junagarh fort in bikaner there is so much to see one can vouch for. Within the vicinity of the fort, there are seven other palaces to entertain you. There are many palaces within the fort: Phool Mahal, Anup Mahal, Bikaneri Havelies , Ganga Mahal, Badal Mahal and Chandra Mahal.

Where is Bikaner and How to reach it?

The nearest airport to reach Bikaner is the Jodhpur International Airport. The airport is located at a distance of approximately two hundred and fifty one kilometres from Bikaner. Bikaner is very well connected with all the major cities of the country like Jaipur, Delhi, Mumbai, Ahmedabad and Chennai by air. The two major railway junctions in the city are Lalgarh Junction and Bikaner Junction.

When should one visit Bikaner?

The best time to visit Bikaner is October to February. At this time you will be able to attend the Camel festival that takes place in January every year. Rest of the year is very hot and there is a chance of getting heat stroke as it is very warm during this time.Also it is very cold in the winter therefore you should avoid visiting Bikaner in extreme winter as well. Dust storms are very common from March to June. During monsoon the weather becomes hot and humid. In all of the months the best time is from October to December as the temperature is not at its extreme and the weather is pleasant!

What should be visited in Bikaner?

The first of them being is the magnificent fort The Junagarh Fort. Rao Bikaji’s Fort also known as ‘Bikaji Ki Tekri’ can be visited.This Bikaner fort right now is in ruins. Laxmi Niwas Palace is another palace which is a former palace and famous tourist spot. The ruler of the former state of Bikaner Maharaja Ganga Singh built this. There are also some of the famous temples in Bikaner called Karni Mata Temple and a Mukam Bishnoi Temple which is a holy place of twenty nine rules of followers of Bishnois. A Jain temple, Laxminath Temple built by Maharaja Rao Lunkaran is also very popular among people.

So before going to Junagarh Bikaner do keep all these things in mind and enjoy this beautiful royal city with your family and friends!