Junagarh fort Bikaner Rajasthan is an age old heritage site. The Junagarh Fort is one of the most looked after places to visit in Bikaner. India is a country of rich history and Rajasthan is the land of royal history of the country. The Bikaner fort was originally called Chintamani. This was renamed as the Junagarh and ‘Old fort’ around 20th century. The Bikaner fort is one amongst the massive Rajasthan forts that is not situated at an elevated hill top. The Beautiful and massive Bikaner fort is an important feather on the cap of Rajasthan Tourism in India.

Forts in Rajasthan have their own history and story. The royal land of Rajasthan gave birth to so many rulers and kings. Every king and princely state has its own royal history. The things that remained common for all the rulers and kings of Rajasthan were their bravery, lavish lifestyle and extremely high class hospitality. Rajasthan is the land of hospitality. Palaces and forts had their own specific needs. The forts were supposed to safeguard the province from foreign invasion. These are fortified constructions usually mortar was used for this purpose. Walls and trenches that surround these forts are huge and utterly strong. They are high enough and strong enough.

The rulers of Bikaner have contributed to the royal history of India. The Bikaner fort resulted to be a marvelous example of architecture and great center of art. The amazing construction took several years to complete. As per the architecture of other Rajasthan forts, the Bikaner fort is also massively built to avoid attacks and capturing of provinces. The inside architecture and the manual beautiful art that has been done on the walls and ceilings of the fort. The inside of the fort consists of several sections. The palaces and temples constructed inside the fort are buildup of red sandstones and marble. The balconies and the jharokhas that are built inside the fort are beautiful. The courtyards are spacious, huge and picturesque. 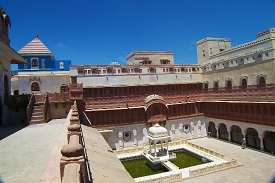 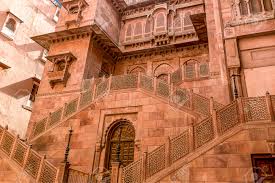 The Junagarh fort Bikaner Rajasthan consists of seven gates. The gates are referred to as ‘Pol’. Karan pol, Suraj pol, daulat pol and chand pol are some of the names. The suraj pol is east facing and hence has the name as per sun light’s availability. Palaces are named as karan mahal, phool mahal, anup mahal and badal mahal. Every palace inside the fort has its specific requirement. The Junagarh fort also has a museum. The museum consists of lots of antique and unique articles and paintings. While looking forward to Rajasthan tourism the Junagarh fort is one of the best places to visit in Bikaner.